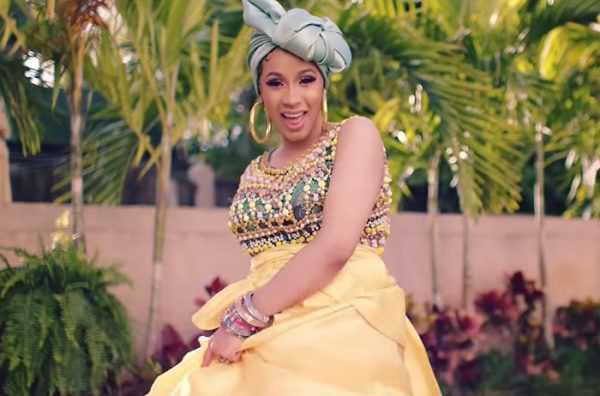 The lyrics from Cardi B‘s sophomore chart-topper, ‘I Like It,’ boast an inventory of items and situations that earn a “thumbs up” from the New York-born rapstress.  Now, for the umpteenth time, she can add “making history” to that list.

When the Bad Bunny & J. Balvin-assisted cut topped the Billboard Hot 100 last year Cardi’s name was scribbled in history books for not only becoming the first female rapper to see her second song reach the chart’s summit, but also the first and only artist this decade to launch two songs to the top from a debut album.  Later, the tune made history again for having the longest run in the Hot 100 of any female rap songs (51 weeks total).

While the aforementioned are just three of many honors the J. White Did It-produced number collected during its prime, this week brought with it news it’s added one more.  Details inside:

Over the weekend the music video for the ‘Invasion of Privacy’ song, ‘I Like It,’ crossed the one billion plays threshold at YouTube.  The feat makes her the first and only female rapper to have a visual do so.

Congratulations are due to Cardi for the song’s enduring success which, as of time reported, has been certified 7x platinum by the Recording Industry Association of America (RIAA).

It’s worth noting the ‘Bodak Yellow’ beauty has technicallyaccomplished this twice in the past when Maroon 5‘s ‘Girls Like You’and DJ Snake‘s ‘Taki Taki’ both entered the Youtube billion views club.  However, ‘Like’ is the first of her own clips to garner such play.  Likewise, rival Nicki Minaj is credited as a feature on multiple videos that have crossed the 1B threshold including Ariana Grande‘s ‘Side to Side,’ David Guetta‘s ‘Hey Mama,’ Jason Derulo‘s ‘Swalla,’ and Jessie J‘s ‘Bang Bang.’  However, none of her leading efforts have garnered a billion views.

As of time reported her ‘Anaconda’ video, with its 884 million views, stands to be the first.