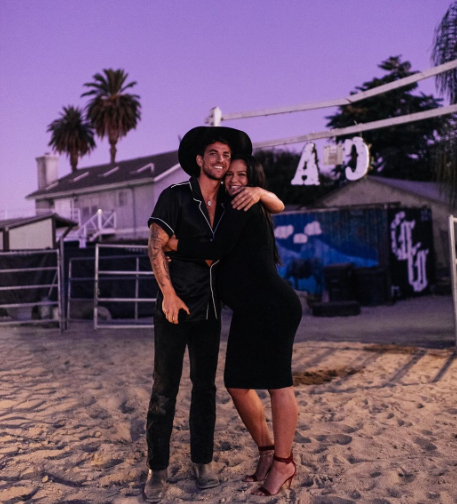 Cassie and boyfriend Alex Fine are engaged! The singer, who is expecting the couple’s first child, a baby girl, shared the sweetest proposal video on Tuesday, just days after Alex got down on one knee. “My favorite day ever! #MrsFine 💍 8.24,” Cassie captioned the cowboy-themed proposal video, which was filmed in a desert setting. Alex also shared the video, along with a few photos with his new fiancee. “Mrs Fine❤️ 8.24 – forever,” Alex captioned the video. “This moment will always be so special to me,” he wrote alongside a photo of himself on one knee with Cassie looking down at him. “I get to marry my best friend in the whole world. How am I so lucky!” The couple’s engagement came just two days before Cassie’s 33rd birthday on August 26.

The video opens with a shirtless Alex petting a horse during a stunning sunset. He slips on a short sleeve black button-up and puts a cowboy hat on as the camera pans to hanging letters of the couple’s first initials, “C” and “A”. Then, a smiling Cassie is seen walking towards Alex, while being escorted by Randy Savvy. She’s dressed in all black while holding a bouquet of pink flowers. Alex gets off a horse and immediately gets down on one knee as he presents Cassie with a diamond ring. The last 20 seconds of the video shows the newly engaged couple hugging, kissing and smiling in celebration. The video closes with Alex riding a horse into the sunset.

The “Me & U” singer and Alex, a personal trainer to the stars and professional bull rider, began dating in December 2018 — after Cassie’s split from her on-again, off-again beau, Sean “Diddy” Combs, earlier that year. They dated for 11 years. Cassie and Alex made their relationship Instagram-official in December, when she posted a photo of the two kissing.